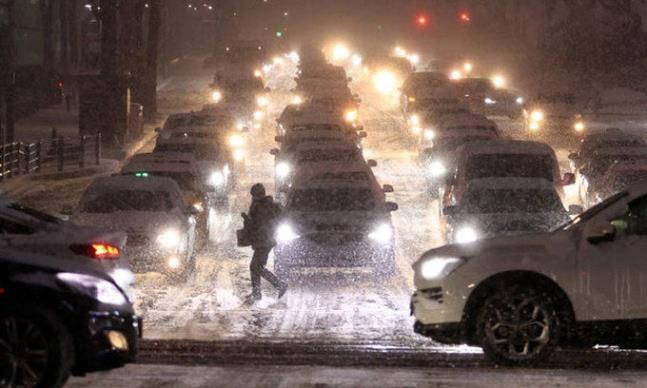 Heavy snowfall during the evening commute on Jan. 6, 2021, causes heavy traffic in Seoul. (Photo: Yonhap)
The Seoul Metropolitan Government has announced special measures to deal with snow removal and related issues as the winter season is just around the corner.

Local authorities said through mid-March next year, the local government will work with all 25 district offices in the capital to remove snow in a swift and timely manner.

More deicing trucks and other equipment will be on standby 24 hours a day.

The move is in direct response to criticism the city faced over its botched handling of heavy snowfall last January.

At the time, accumulated snow and freezing temperatures made roads in parts of Seoul treacherous, resulting in vehicle collisions and major traffic chaos.

The national weather agency has predicted that there's a 40 percent chance that temperatures this winter will be similar to or colder than the annual average, with an 80 percent chance of less rain than usual.

Despite the dry outlook, experts have said even a little rain with freezing temperatures could lead to black ice and significant hazards for drivers behind the wheel.